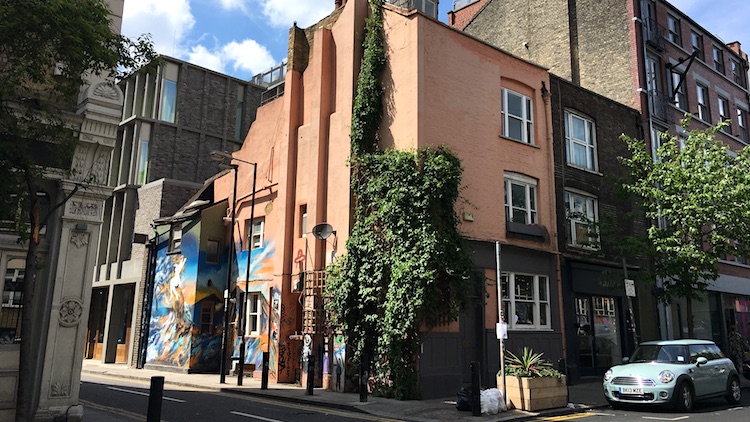 Last month we were made aware of an application to demolish one of a pair of weavers’ cottages at 3 Club Row. Dating from the 1760s, this unlisted building is one of a tiny number of journeymen’s tenements to have survived. Though such buildings are now very rare in the 21st-century streetscapes of Spitalfields and Bethnal Green, they once dominated the area in their thousands. They are unique in the urban landscape and in few other districts in London would the provision of new housing in the 18th century have been so directly associated with the needs of a single industry. In his book The Small House in Eighteenth Century London Peter Guillery highlights their importance both as examples of domestic and industrial architecture – the Live/Work spaces of their day. As Guillery explains, ‘the lack of contemporary views or descriptions of ordinary housing in the 18th-century silk district makes the evidence of surviving buildings all the more important’. Weavers’ cottages were ‘a local solution to a local problem’ and differed from the silk merchant houses of Spitalfields. Stylistically they differ from almost anything else constructed during that period – symmetry and balance were completely disregarded for function and purpose. Large, wide windows, known as ‘loom lights’ or ‘weavers’ windows’ dominated the upper floors to ensure that enough light was available to weave by, to match colour and to join fine threads that had broken. Frequently associated with later slums, the notion that these people lived in squalor is very far from the truth; the quality of the work they produced was entirely dependent on immaculately clean conditions.

The application to demolish yet another building in the area came as no surprise, following on from the demolition of Tadmans, a Regency corner building in Whitechapel, which was neither listed nor in a Conservation Area, thus leaving it vulnerable to the whims of a financially driven developer. The applicant in the instance of 3 Club Row tried to claim that ‘the loss of the building is supported from an architectural and aesthetic point of view, for it pays a less than typical part in establishing the setting and historic narrative of the area’. The literature on weavers’ cottages demonstrates this to be manifestly untrue. The building is key to the historic narrative of the area, and the very fact it is no longer ‘typical’ means that it is all the more significant and worthy of defending.

The Georgian Group strongly objected to the scheme to demolish 3 Club Row and initially requested that the local authority serve a Building Preservation Notice (BPN) in order to ensure that it was given temporary listing protection until Historic England had time to assess the merits of the building for inclusion on the National List. This was then issued by Tower Hamlets, who promptly responded to the huge number of letters of objection to the proposed demolition. Thankfully, the Minister for Culture, Media and Sport announced that 3-5 Club row had been designated as Grade II by Historic England on the 10th June. The application to demolish No. 3 was subsequently withdrawn on the 13th June.

Peter Guillery and Dan Cruickshank wrote about the importance of the journeymen weavers’ houses last year in an article for The Georgian (Issue 2, 2018). This article has been reproduced for Family Tree; re-read the article on their website.