The Georgian period runs from 1714, the year of George I’s accession, to 1830, when George IV died. The term ‘late Georgian’ is often used to describe the arts and architecture of the reign of William IV, but after his death in 1837 the term Victorian is used.

In Britain, the Georgian era, which was relatively peaceful and prosperous, saw a great increase in building. Industrial and civic buildings, town and country houses and villas, more often than not in the Classical style, were all thrown up, and great designed landscapes created. Classical architecture largely defined the age and many of the buildings erected then are today protected in law, whether by being listed or included in a Conservation Area. British country houses, and the now largely lost town palaces, perhaps provide the high water mark of Georgian architectural innovation, style and taste, while the beautiful terraces of Bath, Bristol, London, Edinburgh, Dublin and Newcastle upon Tyne have come to epitomise its architectural elegance and sophistication. 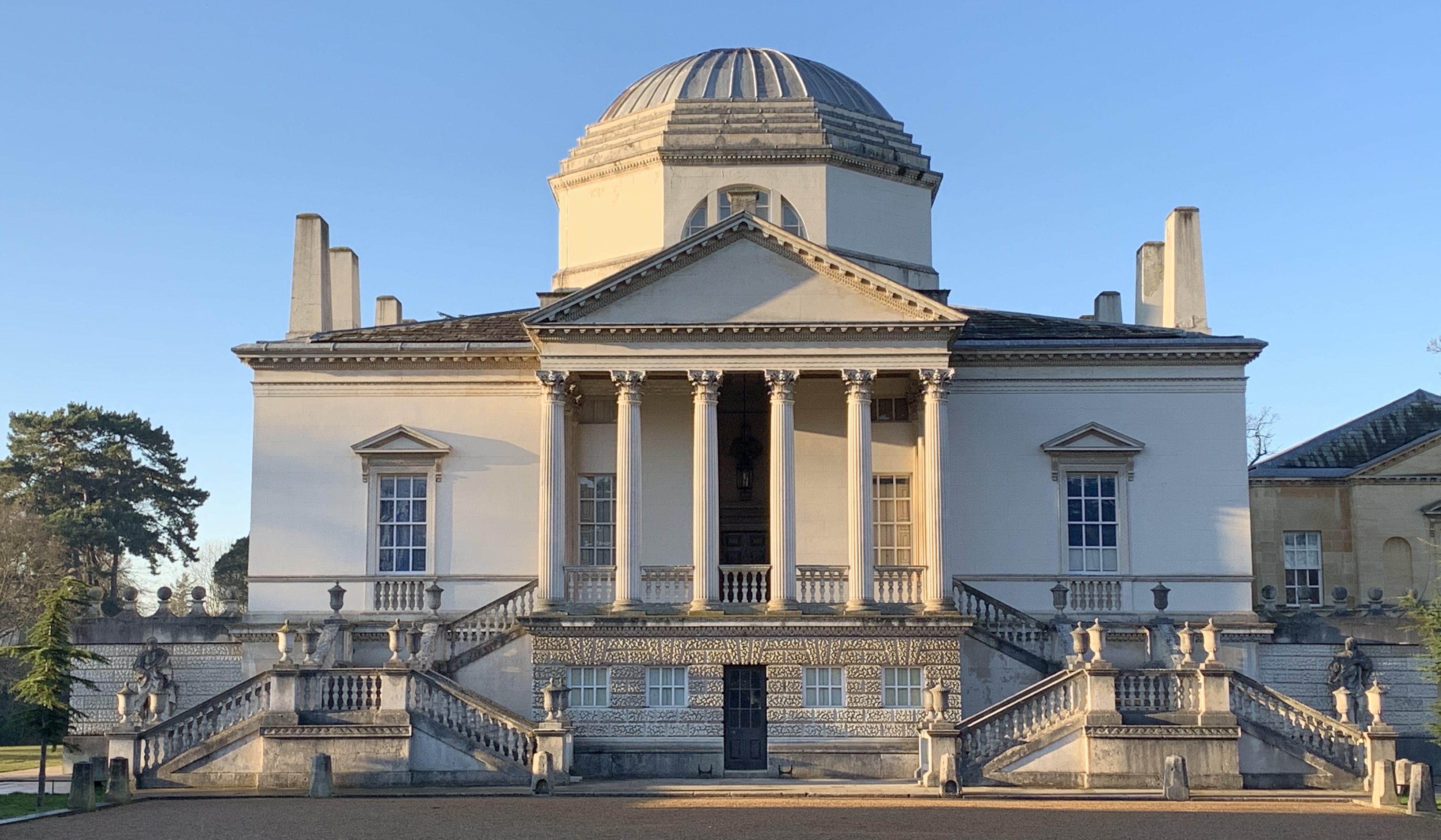 The arrival of the Hanoverian monarchy in 1714 marked a major break with the past and inspired a new, fresh style of architecture: Palladianism or neo-Palladianism. The Palladian style of architecture derived largely from the work of Andrea Palladio (1508-1580), a sixteenth-century Venetian architect, who in turn had been inspired by ancient Roman architecture.  He sought to revive the principles that had underpinned ancient architecture, including proportion, symmetry, and the correct use of the Classical orders. Neo-Palladianism, which also incorporated ideas drawn from the work of Serlio and other Renaissance sources, remained popular from 1714 to about 1760.

Palladianism was not new to Britain, for it had been championed by Inigo Jones (1573-1652) in the preceding century. Its influences can be seen in his work at the Queen’s House in Greenwich, the Banqueting House in Whitehall, and the Queen’s Chapel in St James’s, London. However, due to the upheavals of the Civil War and the Interregnum, the style never fully took hold. Following the Great Fire of London in 1666, which provided wholesale rebuilding opportunities, the theatricality of the Baroque style captured the imagination instead. The Baroque had emerged in Italy in the Late Renaissance and was defined by its rich ornament, bold masses, curvilinear forms and powerful lines. Famous buildings of this character include Seaton Delaval Hall, Northumberland, designed by Sir John Vanbrugh (1664-1726) and St Paul’s Cathedral, London, by Sir Christopher Wren (1632-1723).

The popularity of the Baroque continued into the early eighteenth century, whereupon it was promptly discarded in favour of the purer neo-Classical forms advocated by the proponents of Palladianism. A new generation of architects began self-consciously to revive Palladio’s vision, a process aided by the first complete translation into English of his Four Books of Architecture from 1716. Richard Boyle, 3rd Earl of Burlington (1694-1753), together with his protégé William Kent (1685-1748), championed the new style, designing amongst other buildings the celebrated, centrally-planned, villa, Chiswick House. As with many Palladian buildings, Chiswick’s plain exterior contrasts strikingly with its richly decorated interiors, many of whose details were taken from ancient Roman buildings or the designs (for example of fireplaces and ceilings) of Inigo Jones. Other famous Palladian buildings include Holkham Hall, Norfolk, and Woburn Abbey, Bedfordshire. Major advocates of the Palladian style included Colen Campbell (1676-1729) – whose influential publication Vitruvius Britannicus (1715-25) helped to promote the style – Henry Flitcroft (1697-1769) and Matthew Brettingham (1699-1769). 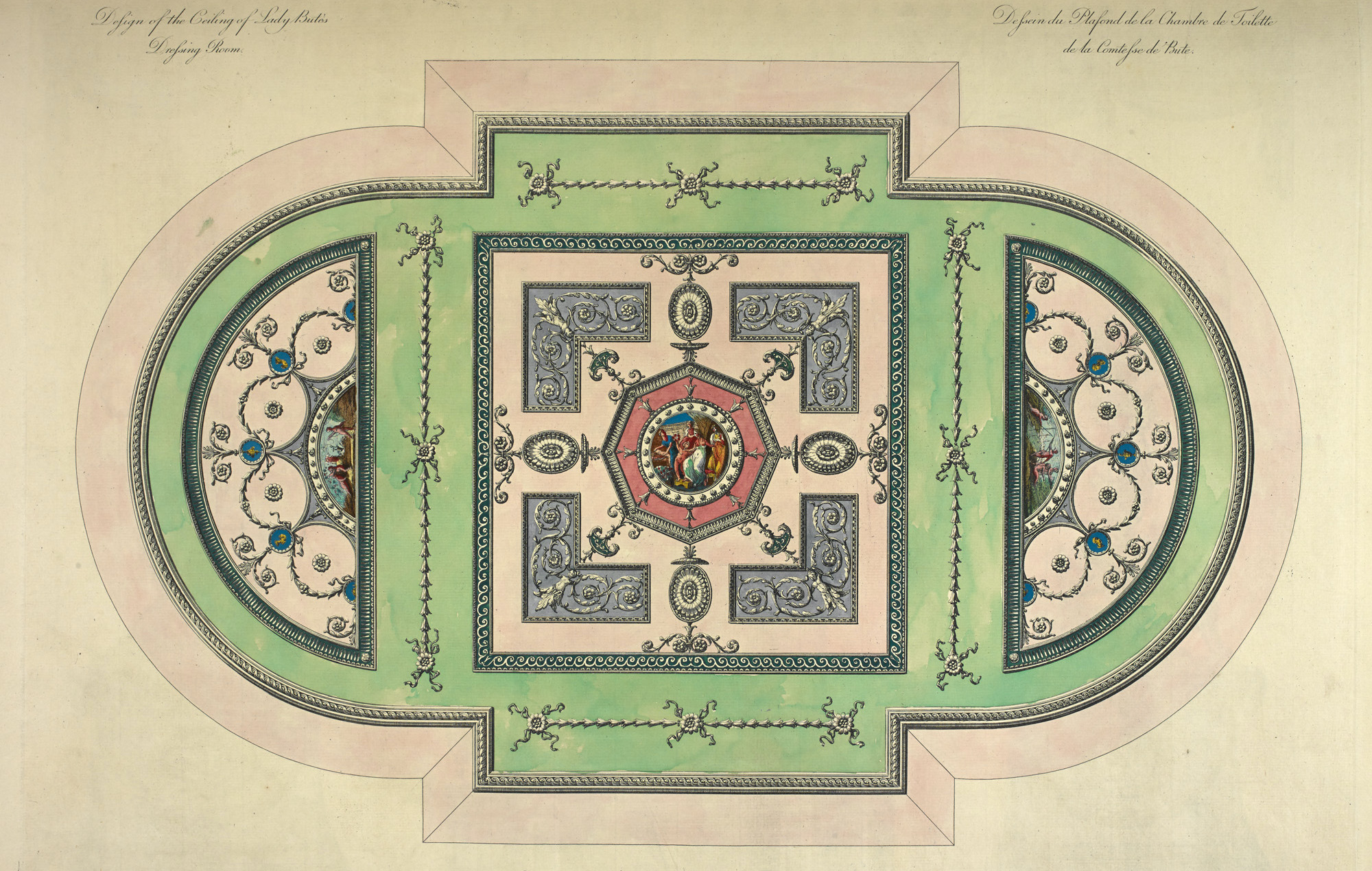 By the mid-eighteenth century a desire to break away from the rigidity of Palladian rules led to the emergence of the more fluid neo-Classical style which drew on a greater variety of Classical sources. It was propelled by the archaeological discoveries at Herculaneum and Pompeii in Italy and the recording of the architecture of ancient Greece. Influential publications such as James Stuart and Nicholas Revett’s Antiquities of Athens (1762) and Robert Adam’s Ruins of The Palace of The Emperor Diocletian (1764), together with the influence of the Grand Tour, fuelled a greater interest in a true antique style. Stuart is credited with introducing the Greek Revival style to Britain, while Adam succeeded in creating his distinctive decorative style using a limited range of ornament distilled from ancient and Renaissance sources. His walls and ceilings are famous for their pastel palettes and delicate, continuous ornamentation, famous examples of which can be found at Osterley Park, Middlesex, Home House, London, and Saltram Park, Devon. Other major proponents of the neo-Classical style include Sir William Chambers (1723-1796) and Sir John Soane (1753-1837).

OTHER STYLES OF ARCHITECTURE 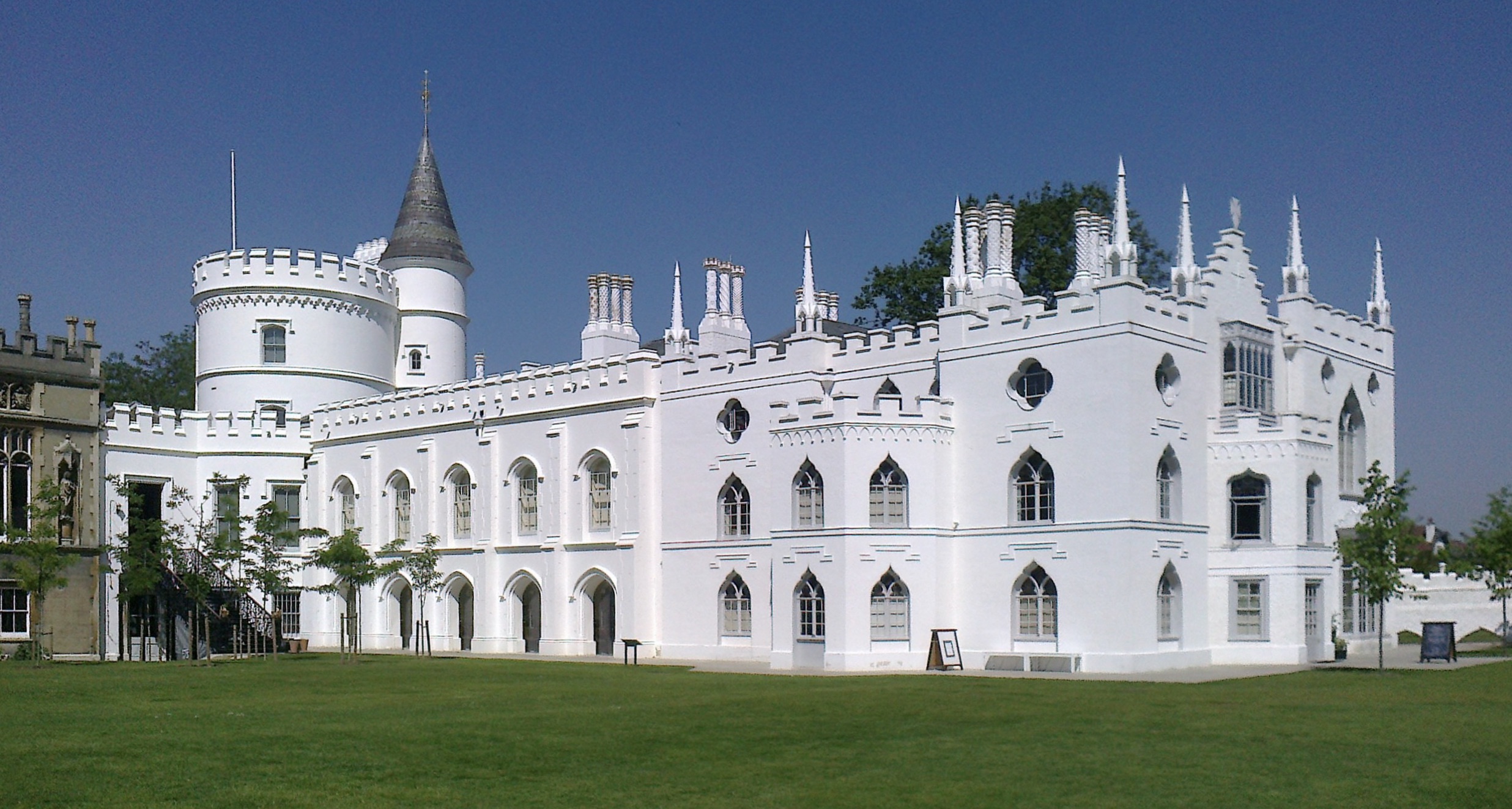 Although the Classical style of architecture was dominant throughout the Georgian era a number of others, such as Rococo, Chinoiserie and Gothic, or ‘Gothick’, also gained popularity. An interest in the revival in the mid-eighteenth century of medieval Gothic architecture was encouraged by antiquaries and architects who saw it as an appropriate national style. It was characterised by the use of Gothic decorative motifs such as finials, lancet windows, hood mouldings, fan vaulted ceilings and crenellations, and became a popular alternative choice to neo-Classical styles. Batty Langley’s influential publication Ancient Architecture: Restored, and Improved by a Great Variety of Grand and Useful Designs, Entirely New in the Gothick Mode (1741-42) served to popularise the style further. Famous examples include Horace Walpole’s (1717-1797) Strawberry Hill House in Twickenham, Sir Roger Newdigate’s (1719-1806) Arbury Hall and Lady Pomfret’s (1698-1761) Gothic house at 18 Arlington Street (demolished).

The Rococo style first emerged in France in the 1720s and 1730s and takes its name from the French word ‘rocaille’, which means rock or broken shell – natural motifs often used by the style. Rococo was primarily used for interior decoration and the ornamentation of furniture, silverware and other luxury goods. It flourished in English design between 1740 and 1770, popularised further by pattern books of ornament by Matthias Lock, Henry Copland, and most famously by Thomas Chippendale’s Gentleman and Cabinet Maker’s Director (1754), which provided patterns for a wide range of English furniture in the Rococo, Chinese and Gothic styles. The Norfolk House Music Room, now in the V&A, is a magnificent surviving example of a Georgian Rococo interior.

Chinoiserie was another competing decorative style, inspired by art and design from China, Japan and other Asian countries. Also emerging in the mid-eighteenth century, Chinoiserie designs often featured landscapes, pavilions, exotic birds, flowers, mythical beasts and Chinese figures.  This style was often used for interior decoration, with rooms beautifully decorated with hand-painted Chinese wallpapers, porcelain and furniture. Chinoiserie was also used in garden architecture, with Chinese summerhouses becoming particularly fashionable during the mid-Georgian era. The Pagoda at Kew Gardens is perhaps one of the best-known examples, completed in 1762 as a gift for Princess Augusta, to the designs of Sir William Chambers. 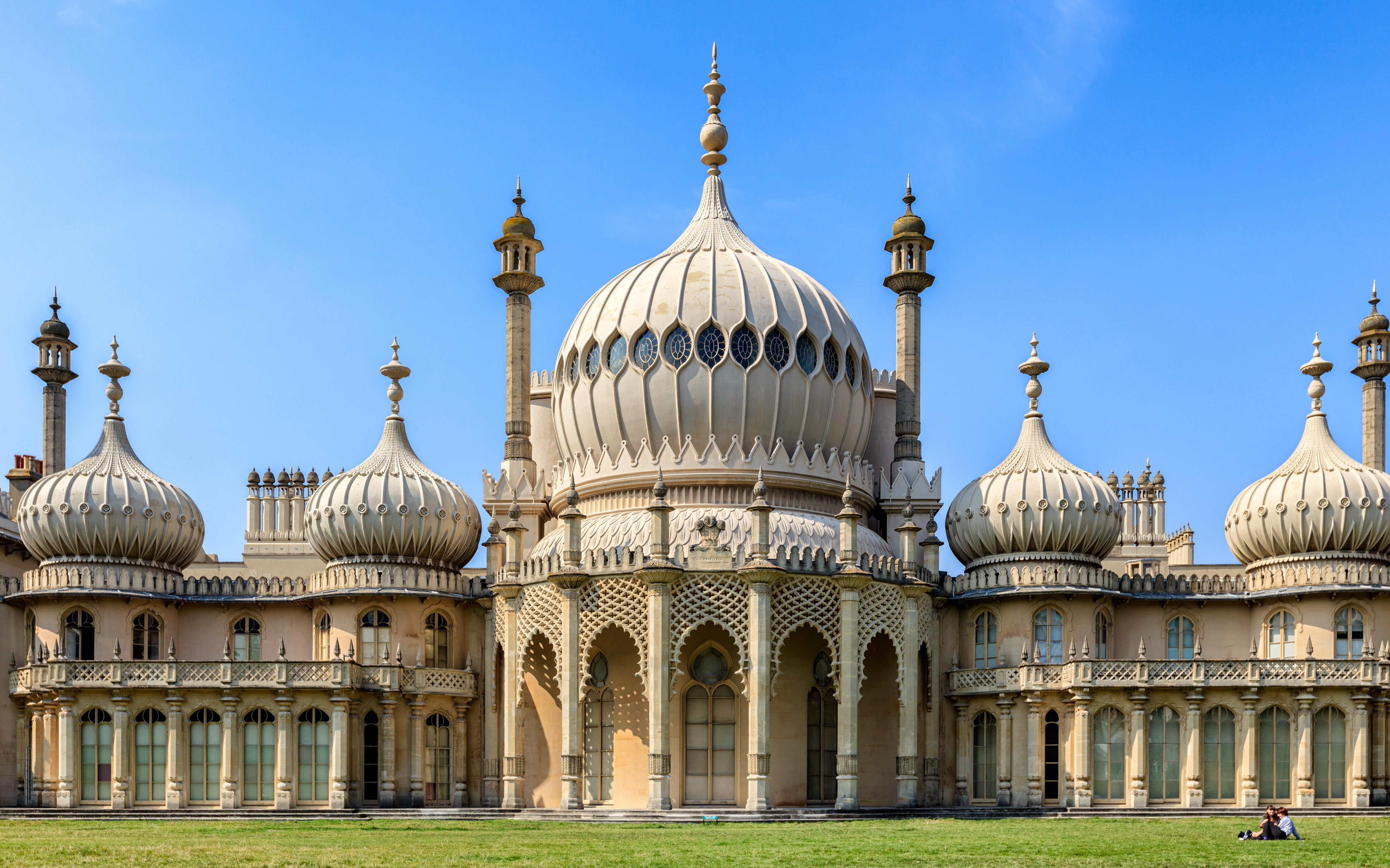 The late eighteenth and early nineteenth centuries saw the emergence of the Regency style, which took motifs from across the stylistic spectrum, including neo-Classical and Gothic Revival, as well as some more exotic styles, including Indian, Chinese and Tudor. Perhaps one of the best examples of the fanciful Regency style is the Royal Pavilion in Brighton, transformed for the Prince Regent by John Nash between 1815 and 1823.

Detailed reading lists can be found on our Bibliographies page, however the following books may help to provide a general introduction to Georgian architecture:

With thanks to Dr Amy Boyington