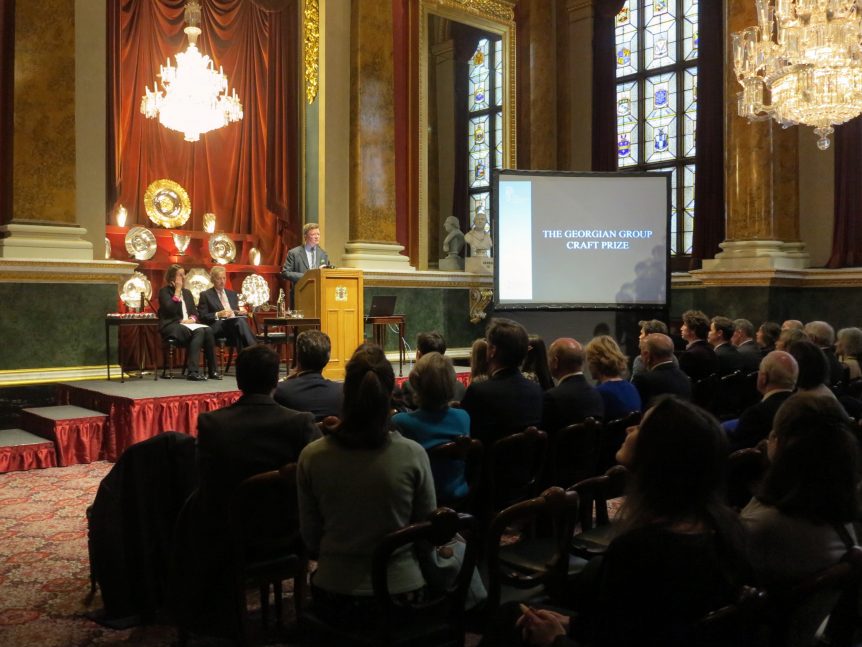 The Georgian Group was delighted to stage its inaugural Craft Prize awards at Goldsmiths’ Hall last night, during the 2019 London Craft Week festival.

The awards, designed to complement the Group’s long-standing Architectural Awards, recognise and celebrate excellence in those traditional crafts that are supported by the Livery Companies of the City of London and their associated charities.

Nominations for exemplary conservation work, the creation of new work using traditional skills or techniques, and work in the ‘spirit’ of the Georgian period were all considered from the participating companies – the Carpenters’, Glaziers’, Goldsmiths’, Masons’, Plaisterers’ and Plumbers’.

Eight awards, announced by Clive Aslet and presented by the Georgian Group’s President, the Duchess of Argyll, were made to both Apprentices and Masters.  Two additional grand prix were given at the end of the ceremony by the Group’s President and Chairman.

The Group is grateful to the Goldsmiths’ for their generous hospitality, to the other Livery Companies and QEST for their support and enthusiasm, to our judges, and to the entrants and award winners whose skill and dedication will in future years help to protect and promote our Georgian heritage and create new work of beauty and quality for future generations.

The following, whose skills and achievements were outlined by Clive Aslet, were honoured on the occasion: