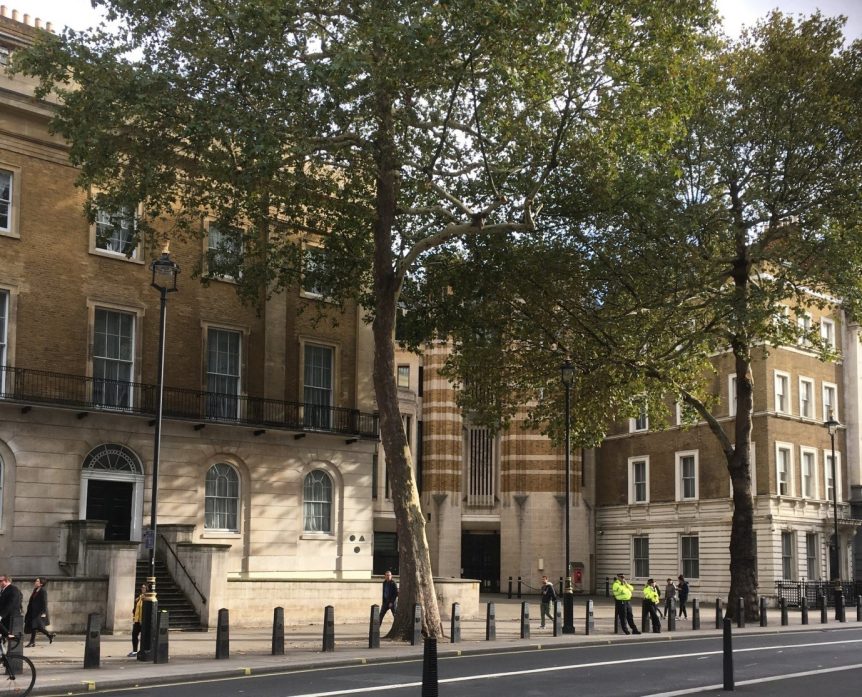 We encourage Georgian Group members to support the campaign to prevent the demolition of a large part of Richmond House, the Grade II* government offices in Westminster designed by Whitfield Associates between 1982-4.

The building responds in an intelligent way to its context, which on two sides is Georgian and later 19th century in date – indeed on its northern flank it incorporates the remaining fabric of Richmond Terrace (1822-24).  Its dramatic Neo-Tudor entrance to Whitehall, directly opposite Edwin Lutyens’s Cenotaph but deferentially recessed from the street frontage, is framed to the north by the eastern angle pavilion of Richmond terrace and to the south by the mid-18th century house at no. 85.  Richmond House itself is exemplary in its massing, in the quality and use of its materials, and in its detailing.  On its completion the architect and critic Roderick Gradige suggested that it marked ‘the beginning of a new architecture.’

Why is Richmond House under threat?

In January of this year the House of Commons voted to relocate to Richmond House in 2025 for an estimated six years to allow for the planned restoration of the Place of Westminster, variously projected to cost between £3.5bn and £5.7bn; the House of Lords may relocate to the Queen Elizabeth II Conference Centre.  A 2016-17 report on the Restoration and Renewal of the Palace of Westminster issued by the House of Lords House of Commons Joint Committee suggested that ’If Richmond House were to be acquired a temporary Chamber could be established in its inner courtyard.’  It emerged earlier this month, however, that the works to accommodate the Commons, proposed by Alford Hall Monaghan Morris, would now see most of Sir William Whitfield’s and Andrew Lockwood’s building demolished.  The building of a third, permanent chamber is a dramatic departure from the joint committee’s proposal that a temporary chamber could be provided in the inner courtyard of Richmond House.  In the proposed scheme, only the grand palace-fronted façade provided by Richmond Terrace and the entrance façade on Whitehall (see photo) would survive.  It is ironic that a major building designed less than 40 years ago is in danger of becoming a victim of façadism.  Richmond Terrace, designed by Thomas Chawner (1774-1851), one of Sir John Soane’s pupils, and built by George and Henry Harrison, suffered this fate in the late 1970s.

A viable, lower-cost alternative has been proposed by Sir Michael Hopkins.  This would see a temporary Commons debating chamber inserted into the courtyard atrium of his award-winning building Portcullis House (1998-2001) on Bridge Street.

Richmond House is listed Grade II* in recognition of the qualities outlined above.  Demolition flies in the face of the statutory system of protection afforded to outstanding buildings.

Demolition flies in the face of the statutory system of protection afforded to outstanding buildings.

The energy embedded in Richmond House during its construction – the sum of the energy expended in the extraction of raw materials, transport, manufacture, assembly and installation – is enormous and will be wasted if demolition proceeds.  Does doing so demonstrate national leadership in promoting environmental best-practice?

What impact might the introduction of the security measures necessary to convert Richmond House to parliamentary use have on the architectural dignity of Whitehall and the immediate setting of the Cenotaph?

Details of the campaign against the current proposals by SAVE Britain’s Heritage can be seen via the following link.

Sir William Whitfield’s work ranges from 1960s brutalism to neo-classicism.  In 2004 he was awarded a Georgian Group architectural award (Best New Building in the Classical Tradition) for the design of Tusmore House, Oxfordshire.  He has served too as a trustee of the Georgian Group