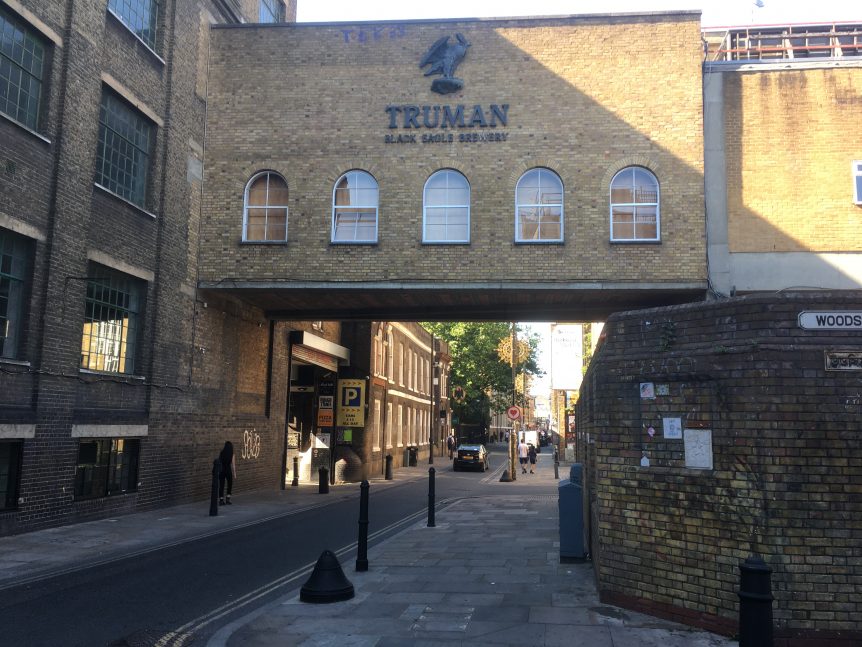 Last July (2020) The Georgian Group wrote to the London Borough of Tower Hamlets recommending that a coherent development plan should be produced for the Truman Brewery site situated along Brick Lane, arguing that without such a plan in place the character of the impressively complete brewery and the surrounding Brick Lane and Fournier Street Conservation Area would very likely be threatened by piecemeal development.

An application for the piecemeal development of the southern section of the site has now been submitted. A commercial development is proposed comprising a five-storey building at the junction of Brick Lane and Woodseer Street. The existing twentieth-century building on the site is to be refurbished for new purposes and the use of the land surrounding it intensified. The Tower Hamlets Planning Committee has wisely deferred determination of the application until a site visit for its members can be organised.

Truman Brewery’s long association with Brick Lane started when in 1679 Joseph Truman purchased from John Hinkwell an existing brewhouse on its western side. A programme of expansion followed with successive members of the Truman family contributing to the building of the complex we see today. Most notably, first Joseph Truman and then Benjamin Truman made additions in the early eighteenth century. It was under the latter’s direction that the grade II* Directors’ House was built in circa 1745 and later remodelled in the 1770s. This later remodelling aggrandised many of the interiors, apparently to encourage members of his family to spend a greater proportion of their time in Spitalfields. In 1760 Benjamin Truman was knighted by George III, an elevation in social status marked by his sitting for a portrait by Thomas Gainsborough.

Buildings of note along Brick Lane and within the former Truman Brewery site include The Directors’ House (GII*), Brewmaster’s House (GII), former Stables to Truman’s Brewery (GII), Former Engineer’s House (GII), VAT House (GII) and the Black Eagle Brewery (GII). All of these are of considerable architectural and historic interest, both individually and collectively. However, particular mention must be made of the Directors’ House which acted as a domestic residence and company headquarters. The exterior is impressive with Venetian windows to the first floor and double panelled doors set in a Gibbsian surround to the north. Internally, the building poses more surprises with elaborate detailing including panelling, box cornices and, in Sir Benjamin’s drawing room, a rococo ceiling. The former dining room is accessed by a corridor with semi-circular arched vaults over fluted ionic pilasters.

The site was modified in the late twentieth century by Arup Associates who were tasked with designing the administrative offices for the brewery. Located on the west side of Brick Lane, this intervention was commended at the time for its sensitivity to the site context. This was achieved through the adoption of a glass façade which mirrored the VAT House and Engineer’s House – both grade II listed, which sit on the opposite side of Brick Lane.

The Brewery finally closed in 1989 because the cost of re-investment was prohibitive and the then owners, Grand Metropolitan, ceased brewing on the site, though they remained there until 1995.

The Georgian Group believes that the character and appearance of the Truman Brewery is of great value and worth protecting. It is an impressive example of a brewery complex that operated continually for more than 300 years. In order to afford the site adequate and appropriate protection a clear development plan needs to be produced. The need for this is clearly set out in the Conservation Area Appraisal for Brick Lane and Fournier Street. Despite this, one has not yet been drawn up and this leaves the site perilously open to piecemeal development that could threaten its character and legibility. 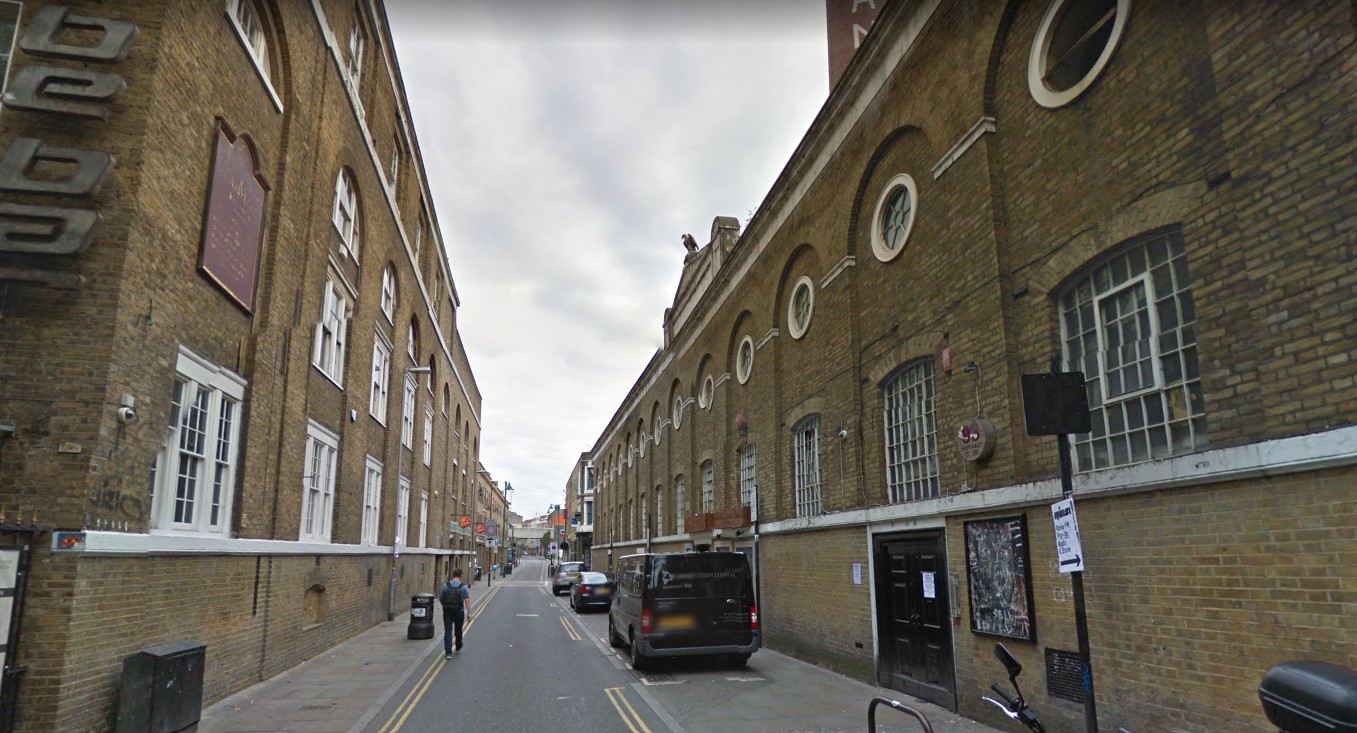 The Brick Lane and Fournier Street Conservation Area is one of immense importance and home to streets of exceptionally well-preserved eighteenth-century houses mainly built by master weavers during the settlement of Huguenots emigres in Spitalfields. There is consistency in the appearance of Fournier Street, Wilkes Street and Princelet Street where many original details such as doors, windows, hoods, and ironwork, have survived. Heading further west along Fournier Street, one encounters Christ Church Spitalfields, designed by Nicholas Hawksmoor, a building which dominates the skyline and is a pleasure to the eye. Walking the streets of the conservation area one can appreciate the character and the consistency of both the scale of the buildings and their use of materials. This is something that should be preserved for future generations to experience.

Through the centuries, Brick Lane has been a place of migration for various communities which have arrived to build a life in Britain. In the late seventeenth century, Huguenots settled in Spitalfields following religious persecution in France, unleashed by the revocation in 1685 of the Edict of Nantes. The Huguenots were highly skilled individuals who established the silk industry in Spitalfields, and for which it became renowned in the following century. In the eighteenth century, the area saw an influx of Irish weavers after the collapse of the Irish linen industry, with a large proportion of them later finding employment in the construction of London’s docks, whose construction began at the start of the nineteenth century.

A series of anti-semitic pogroms in Russia and other Eastern European countries in the latter part of the nineteenth century drove many Jews to escape persecution in their homeland and to find safe haven in East London.

Finally, the settlement in the 1950s of many Bangladeshis helped to establish the present cultural identity of the area. Tower Hamlets was an industrial borough and home to the garment trade in which many new arrivals found employment. The character of the built environment evolved with the opening of the now famous curry houses running down Brick Lane, which many people will be familiar with today.

The proposed development has the potential to threaten the surrounding character and cultural identity through the introduction of an alien building. The Georgian Group has called for a development which is sympathetic and in-keeping with the existing buildings on the site and in line with an agreed development plan. A campaign has been ignited under the banner ‘Battle for Brick Lane’ and is critical of the piecemeal approach to the site and the harm that would be inflicted on the area as a result.

An exhibition has opened at 25 Princelet Street, Spitalfields in order to show the public the proposed development and alternative possibilities for the future of the site. Alongside this, is a photographic exhibition exploring the architecture of gentrification and its impact on Bangladeshi identity in the East End of London.

Read The Georgian Group’s comments here. If you too wish to be involved in the ‘Battle for Brick Lane’ visit their website for more information and details on how to get involved.