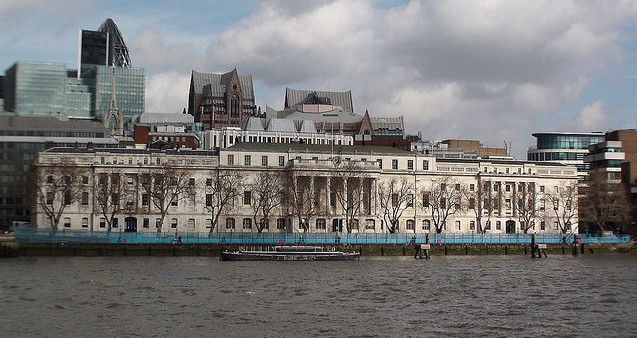 The Georgian Group has registered with the City of London Corporation its objection to a scheme to convert the grade I-listed London Custom House into a luxury hotel. In our view the proposed works would harm the significance of the building, in pursuit of a use that we do not consider viable in the long term, and fail to provide sufficient public benefit in recompense.

The Custom House is one of the great Thames-side public buildings of the Georgian period and other than the east wing remains very largely unaltered. It was designed for the collection of customs duties and is a rare survival of a purpose-built Georgian office, accommodating in its heyday some 2,000 officials. Apart from its impressive façade to the Pool of London, its architectural glories include: the Long Room on the piano nobile, the (early) fireproof vaulted ‘Queen’s warehouse’ on the floor below, a ceremonial Robing Room in the west wing, grand staircases, and fine Regency details such as fireplaces and panelling.

Two architects were responsible for the Custom House that we see today. David Laing, a pupil of Sir John Soane, who served as Surveyor of HM Customs from 1810, was responsible for the design and construction of the building which, when finished in 1817, was favourably compared with the Parisian architecture of the Napoleonic era.

In 1824, however, part of the south façade of the Custom House and the floor of the main hall collapsed. It proved that a fraudulent contractor had skimped on the timber piling and on the quantity and quality of other materials. The Office of Works, responsible for public buildings in London, took over the project and the architect Robert Smirke, who had previously resolved a similar problem at the Millbank Penitentiary, was appointed.

Smirke rebuilt the fallen southern section of the façade and remodelled the interiors of the west wing, adding a Robing Room where customs officials would have changed into their livery before entering the Long Room. Subsequent changes have been very largely limited to the east wing which was bombed in WWII and rebuilt behind a facsimile of its original façade.

The building has most recently been occupied by HMRC whose security requirements demanded that the riverside promenade be fenced off. It has as a result been long out of public sight and mind. This was not the case historically. In 1844 Mogg’s New Picture of London and Visitor’s Guide to its Sights noted: ‘The Quay, enlarged by a substantial embankment, forms in fine weather a beautiful promenade; and the view of the Thames from thence is considerably enlivened in the summer by the passage of steam-boats and other vessels that are perpetually navigating this noble river.’

There was public access to the building too. In 1895 Reynolds’s Shilling Coloured Map of London, noted: ‘The principal object of interest is the Long Room. Open free, daily, from nine till three.’ The Custom House also contained a Smuggling Museum. 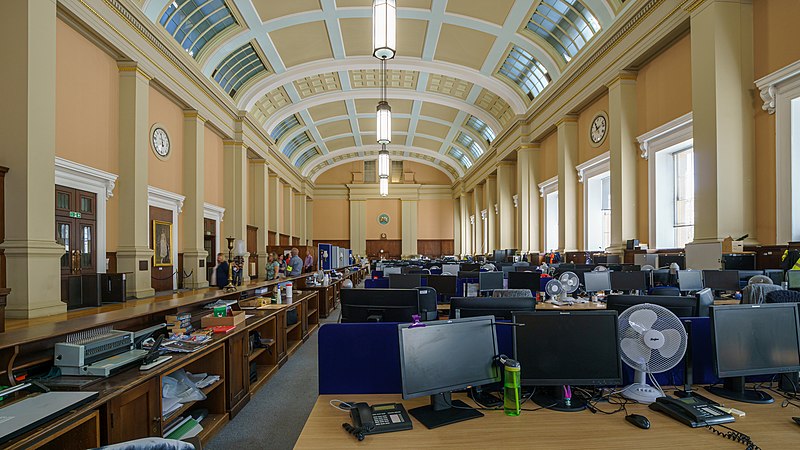 Last October SAVE Britain’s Heritage called for a public discussion about the Custom House in the hope of securing a better future for it. A future in which, consistent with the GLA’s Thames Cultural Strategy, there would be much greater public access than is guaranteed by the present scheme. We too hope that there will be an opportunity for such a debate –which in SAVE’s words could provide ‘a once in a generation opportunity’ for the Custom House and the public.

The Georgian Group asks why the Custom House should be treated less respectfully than was Somerset House, another great Georgian office complex just upriver? Only a few years ago it was carefully conserved and reimagined as a thriving centre of activity, attracting tenants from the cultural, educational and business sectors, with public access at its heart. A new access was made from the Embankment (opening up an original entrance from the river), new museum spaces were created and the great courtyard opened to the public for the enjoyment of film screenings in summer and ice-skating in winter. In achieving all this, deleterious alterations were not made to original fabric and its all-important river skyline was not compromised by the addition of rooftop glass pavilions, both of which would happen to the London Custom House if the present scheme is approved.

The Georgian Group considers that agreement to full public access along the river terrace, as part of London’s North Bank Walkway, should be a pre-requisite for any proposal to reuse the Custom House. It is the public benefit of access to and through the building that should be weighed – as is demanded by the National Planning Policy Framework – against the potential harm of any works.

Read the Georgian Group’s letter of objection here (to read the documentation pertaining to the application on the planning portal click here). If you too think that what is proposed is not good enough for this important building please add your voice by following the instructions set out here.