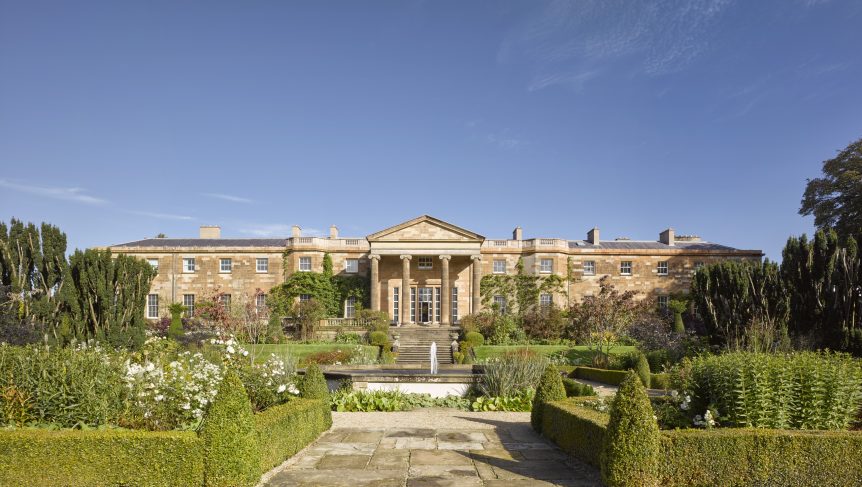 Our annual Architectural Awards, generously sponsored by Savills, took place at the RIBA on 1 October this year. The Awards, now in their sixteenth year, recognise exemplary conservation and restoration projects in the UK and reward those who have shown the vision and commitment to restore Georgian buildings and landscapes. The awards ceremony was presented by Dr John Goodall, chair of the judging panel and Architectural Editor at Country Life, with certificates handed out by the Georgian Group’s President, the Duchess of Argyll.

The winning schemes were chosen from nearly 40 entries, with shortlisted projects encompassing a broad range of building types. John Goodall says: “It has been inspiring to see such a variety and quality of submissions this year. The Georgian Group Awards are a vital means of recognising a whole sphere of contemporary endeavour and achievement that might otherwise go unsung.”

A list of the winning and highly commended entries in each category can be found below.

The Georgian Group Awards are a vital means of recognising a whole sphere of contemporary endeavour and achievement that might otherwise go unsung.Dr John Goodall

Re-use of a Georgian Building

This project saw the transformation of the grade I-listed Shire Hall, erected between 1796 and 1800 to the designs of Thomas Hardwick, from council offices to the Historic Courthouse Museum, a place where visitors can learn about the history of justice and injustice. Historically significant as the site where the Tolpuddle Martyrs were tried in 1834, the building still retains its Crown Court, cells and dock. The work has utilised and enhanced the existing spaces with minimal intervention and harm to the existing fabric while also allowing public access throughout.

The original stables on the Cambo Estate were designed by George Paterson in the 1760s and subsequently extended to form a larger complex. The building has been redeveloped as a new facility for Cambo Heritage Trust, which provides education and volunteering opportunities, and now offers education rooms, a shop, an interpretive exhibition, a kitchen, a café and staff offices, while retaining and consolidating the existing fabric.

The conservation and restoration of incised and painted historic street signs in Bath has seen 52 street signs restored between 2010 and 2018, with more planned. The work has involved sensitive cleaning, making repairs with lime mortar and Bath stone where necessary, the occasional re-carving of worn lettering, replacement of missing letters by carved indents, and re-painting. The project has been supported by Bath & North East Somerset Council and the Bath Preservation Trust.

When Great Pulteney Street began to be built in 1798, each house would have been lit by a lantern in an iron overthrow; by 2010 only a few fragments of these structures remained. The Pulteney Estate Residents’ Association sought professional help to reintroduce lanterns and overthrows across the estate. Harrison Brookes Architects, with support and advice from the conservation team at Bath & North East Somerset Council and from the Bath Preservation Trust, devised an appropriate design, following a detailed inspection of all the properties across the estate and considerable research was undertaken both into the ironwork and glass components.

Restoration of a Georgian Garden or Landscape

Originally constructed 1761-62 by the architect Sir William Chambers for Princess Augusta, successive repairs and decorative changes had eroded the original appearance and meaning of the Pagoda. Closed to the public since the 1980s, after five years of thorough research the Pagoda has undergone major restoration and its views over London can be enjoyed once more by visitors. The project has aimed to return its appearance as closely as possible to that which William Chambers first intended, including the reintroduction of the distinctive dragon sculptures that perch on the roof of each storey.

Client: The Earl of Devon

The Belvedere was built for the 2nd Viscount Courtenay between 1771 and 1774 in the Gothick style.  It was badly damaged by fire in the early 1950s and has been derelict and roofless ever since and, until the present project was completed, it was on Historic England’s ‘Heritage At Risk Register’. The repairs works have stabilised the structure, made it wind and water tight and reduced the risk of further structural deterioration, enabling the structure to be opened to visitors. This important phase of work is hoped to a first step towards a fuller repair of the building fabric in due course.

Restoration of a Georgian Building in an Urban Setting

Pitzhanger Manor was the country estate of Sir John Soane, who purchased it in 1800 as a showcase for his designs and as a means of impressing visitors. Later additions and alterations, including a large 1844 extension, meant that by 2010 the building that Soane had lived in was no longer discernable. The eight-year project restored the Manor to its c.1810 form, demolishing all later additions, with the exception of the late thirties Library building, and, where possible, reinstated significant missing elements of Soane’s design.

Templeton House was completed in 1786 as part of the Grove Estate and since then it has had a number of distinguished inhabitants, including Winston Churchill, who briefly resided in the house in 1919-20. Following nearly 70 years as a student hall of residence, the nine-year restoration project carried out by Richstone Properties has restored the historic grandeur of the building. The exterior and interior have been painstakingly conserved and repaired, with original elements carefully recreated based on historical sources. The three-acre garden and pleasure grounds have also been restored.

Restoration of a Georgian Interior

Built in 1787 as part of the first stage of Pavilion building works to the designs of Henry Holland, the Saloon was transformed in 1823 by Robert Jones into one of imperial magnificence and sumptuous grandeur, appropriate to the Prince Regent’s coronation as George IV.  This suitably majestic scheme was achieved through the use of lavish gilding, crimson silk and silvered wall decoration, all of which was later lost. This remarkable interior has been restored under the direction of David Beevers, Keeper of the Royal Pavilion, with advice from the textile historian Annabel Westman (who discovered the pattern of the silk hangings after years of diligent research), and the skills of a team of specialist craftsmen and manufacturers.

Restoration of a Georgian Country House

Dating from the second decade of the eighteenth century, Chettle House was built by the Smith brothers of Warwick, probably to the design of Thomas Archer. The house was subdivided into residential apartments following the Second World War.  The present owners have restored the house to a single residence with the help of ADAM Architecture. The body of the house has been restored and re-pointed, while the grounds have been landscaped in keeping with the house’s Georgian provenance.

Dating from the reign of William and Mary, Ven was rebuilt in the 1720s by the architect Nathaniel Ireson and extended again in the mid 1830s by Thomas Cubitt and Decimus Burton. Renovations and modernisations in the twentieth century saw it lose some of its historical charm. The project restored the building, removing cement render, repointing the brickwork and replacing stonework where necessary. The interiors were redesigned, with the original layout based on Decimus Burton’s plans reinstated, and redecorated, with unique period furniture and art combined with contemporary pieces to create a revived space.

Haile Hall dates from c.1591 with additions in the seventeenth and eighteenth centuries and has been the seat of the Ponsonby family for hundreds of years. Structural repair work had already been undertaken when the present owners acquired the house but parts of the building were without floors, plaster, plumbing or electricity. As well as repairs to the body of the house, the interiors have been redecorated and furnished in a style more in keeping with the history of the house.

Restoration of a Public Building

The Painted Hall was completed in 1705 under the direction of Nicholas Hawksmoor, Sir Christopher Wren’s principal designer and Clerk of Works. Two years later, James Thornhill began the task of decorating the walls and ceiling of the Hall, which took 19 years to complete. Conservation of the murals has long proved a challenge. In 2011 a detailed survey and analysis of the paintings was undertaken and, following a successful test clean in 2012, a larger project to conserve the paintings was embarked upon. As part of the project, environmental controls have been introduced to limit damage to the paintings and the King William Undercroft has been opened up to provide a new visitor entrance which will enhance the visitor experience.

New Work in the Classical Tradition

This project comprised a major reordering of two adjoining properties on Cheyne Walk: No. 96 (Grade II*), formerly a part of Lindsey House, and No. 94 (Grade II), an addition to the east. Lindsey House was built by the 3rd Earl of Lindsey in 1674 and remodelled in 1750 by Count Zinzendorf.  As a result of the subsequent subdivision of Lindsey House, No. 96, the home and studio of the artist James McNeil Whistler, was left without proper circulation space and piecemeal interventions in the nineteenth and twentieth centuries had left a very incoherent arrangement. The works included re-roofing, re-servicing and the installation of a new cantilevered staircase to provide an enhanced circulation space.

Giles Worsley Award for New Building in a Georgian Context

29 Percy Street is a five-storey town house dating from 1770.  The client’s brief was to add a gallery to the rear of the building to house a collection of photographs, prints, pastels and lithographs and to create a courtyard retreat. Building on the remains of an earlier closet wing, the architects designed a slim three-storey structure of Corten steel and glass.  The two upper stories are accessible from the house and each contains a gallery for storing and viewing the collection with the aid of a system of steel screens, hanging on rails, while red blinds are used to control light and to protect the works of art.

Built in the eighteenth century for the Marquesses of Downshire, Hillsborough Castle is one of Northern Ireland’s most significant historical buildings. The official residence of the Queen in Northern Ireland, as well as the Secretary of State for Northern Ireland, this project has opened up public access to the palace and its gardens. The Castle has been restored and a sequence of rooms has been re-presented in order to provide a narrative that tries to reflect all sectors of the community. New visitor facilities have been created in the Lower Courtyard and Stable Yard and the gardens have been transformed, with the Walled Garden turned into a working garden and the historic features of the Lost Garden reinstated and conserved. The scale of this project has created employment, supported local social cohesion and encouraged engagement and learning.